Why The Detention Market Needed Another Detention Equipment Contractor 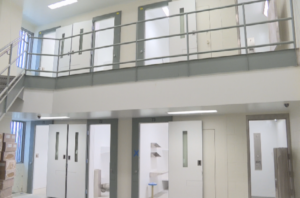 A year ago, Montgomery Technology Systems, LLC announced that we were getting into the Detention Equipment Contracting business. By a shear act of Providence, we were able to absorb most of the core team from CCC Group’s detention contracting division, meaning that we were able to hit the ground running as a Detention Equipment Contractor. This past year has proven that decision to be a wise one for a number of reasons. But, with all of the recent ups and downs in the detention contracting market, some might wonder why we did it. Why would MTI, after 30 years of success as a detention control system manufacturer, choose to jump all in as a Detention Equipment Contractor? In this article, I want to explain why our market needed another DEC, and why we believe MTI/MTS was uniquely suited to fill that void.

A Shrinking Market of Viable Bidders

Over the past two years, it has become apparent to anyone involved in jail and prison construction, that the selection of qualified detention equipment contractors who were stable enough to bid on any given project was shrinking drastically. Some of this shrinkage was caused by DECs being bought out by other contractors or large holding companies with other interests. Also, the new construction market for jails and prisons has been on a decline since the early 2000s, with that decline being accelerated during the Great Recession. As a result, there were several DECs that just could not justify staying in the game. Some turned to other work, while some closed the doors altogether. Beyond that, many of the DECs that still remain have suffered under the financial strain to the point that they cannot perform like they are expected to.

Because of this downward pressure, MTS heard from many architects and construction managers who were concerned about their projects having competitive bids and meeting budgets. While it is the goal of most companies to be the last man standing, most people recognize that the healthiest market is one in which there is strong competition. The adverse affect of the buy-outs and collapses of some contractors meant that pricing would go up and the quality would go down.

MTS recognized that this lack of competition would afford us an opportunity to provide a better option to the market: an option that was both cost-effective and quality-oriented.

A Game of Packaging

While the pool of viable Detention Equipment Contractors shrank, the games that contractors play only increased. Because there were fewer bidders on a project, the DECs that did bid could package their bid in such a way that hid the cost of a certain system or product. The DEC could also use sub-par products to get the cost down and balance out more expensive products in another section of the specification. While these games have always been played, with so few playing the game now, it leaves the owner with very few options to consider on bid day.

MTI started out 30 years ago with the express purpose of just manufacturing quality detention control systems. But, as the contracting market shrank and the games were played, we realized we needed to start bidding work directly, and in 2007 we started MTS to bid directly as a Security Electronics Contractor. That same realization came to us as we tried to bid on projects which we really had no chance of winning, not because we didn’t have the best price, but because our number was never seen thanks to the packaging game. Since starting the detention division at MTS, we have been able to provide a cost-effective alternative to the standard packages that show up on bid day. And, MTS detention has assisted at least five different projects over this past year by bringing them into budget with a competitive bid.

A Pattern For Success

MTS Detention has had a great year! This year has been the highest year for bookings in the history of our company, even when factoring in the increase in volume due to the larger contracts that come with DEC work. We believe that we have opened many eyes to the possibility of a stable company in the DEC market; a company owned and operated by a family of engineers, who approach things from with a long-term view in mind. MTI has always been a company that is in it for the long haul. We manufacture systems that are intended to last for the life of the facility. We bring that same mentality to what we do as a Detention Equipment Contractor. We don’t just want to win the next project. We want to offer the owner the highest quality products for the most cost-effective price. We want to instill confidence and loyalty from our customers due to the professionalism and quality of our work.

A year later, MTS is licensed in 33 states for detention and security related projects. We have two offices located in Greenville, AL and San Antonio, TX, along with service locations throughout the country. We’ve completed over 40 projects in that timespan as well. These projects have included DEC/SEC combo projects, DEC only, and SEC only projects, ranging from large multi-building new construction projects to simple security retrofits. MTS will continue to be successful for years to come as both a Detention Equipment and Security Electronics contractor, and we can say this because we bring a unique, long-term approach to this market.